Are You Feeling It?

An often repeated truism is that to be good at something, you should put yourself into an environment where you can follow people more skilful than you. Then, all being well, assimilate some of  what they have. The  reverse is also true. For example, most responsible parents would worry if their children were keeping bad company in case they picked up the poor attitudes and behaviours they were exposed to.

Thoughtful Taijiquan practitioners accept then that simply having the correct physical form is not enough. Beginning level students (here we are not referring to the amount of time a person has trained, but to their understanding of the training method) often perform the shape or pattern of the forms or push hands drills rather than actually “doing” it. An individual may be a good mimic, but comparing them to a highly skilled exponent it seems something is missing. 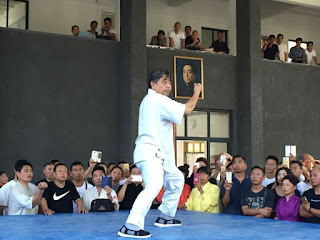 In Chenjiagou it’s said that to become skilful you must be able to copy the external shape and work out and understand the inner aspects. Replicating these less obvious requirements calls for a deeper level of attention. The ability to be present in the moment requires an inner calm and full engagement to the action being practiced. As well as demonstrating the correct shape, all of the internal requirements of Taijiquan must be actualised. Of equal importance to the formal instruction process is the informal learning process. Observation is perhaps the single most important mode of informal learning. By watching more experienced practitioners learners can absorb the subtleties and essence of the methods.

Irish fencing champion John Twomey gave an interesting parallel from the modern sporting arena after the experience of training in Estonia: “He remarked how coaches from many countries had trained him in technique, but his Estonian coach told him only to watch the best fencers as he was training, to sense their feeling, imitate them, be like them, not to concentrate so much on technique but on that “feeling”, the special spirit of perfect fencing.” (Source: Peak Performance: Zen and the Sporting Zone by Felicity Heathcote psychologist for the Olympic Council of  Ireland). The same applies to learning Taijiquan, if you put yourself in good company and look deeply enough some of it might literally rub off on you.