The traditional way- harder to learn, but worth the effort!!! 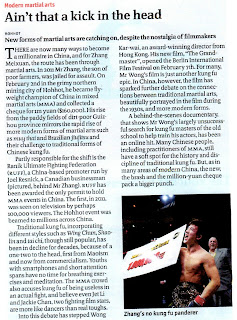 The decline of traditional Chinese martial arts in China (including Taijiquan) was reported in a recent edition of the Economist magazine of all places. Not the usual place you would expect to find a critique of  the state of play in the motherland. An article titled "Ain't that a Kick in the Head" spoke of the rapid rise of modern forms of  martial arts like Brazilian Jujitsu and of the popularity of recently introduced MMA events and their effect upon the home-grown systems. The article stated that:

"Traditional kung fu, incorporating different styles such as Wing Chun, Shaolin and Tai Chi, though still popular, has been in decline for decades, because of a one-two to the head, first from Maoism and now from commercialism. Youths with smart phones and short attention spans have no time for breathing exercises and meditation". The article concluded that: "Many Chinese people still have a soft spot for the history and discipline of traditional kung fu. But, as in many areas of modern China, the new, the brash and the million-yuan cheque pack a bigger punch".

I had an interesting conversation in Singapore a few weeks ago with 86 year old Chu En Sian who trained in traditional Chinese wushu at an early age. She was disappointed with the simplification of the old ways of training and was quite clear in her opinion (and I completely agree!):  "The traditional way is harder to learn, but it is worth learning. Everything in the traditional method is there for a reason and you can't get the full benefit by simplifiation and discarding pieces from it"!

People often justify this simplification with reasons like - "the more people who know about it the better",, "students are not able to do the traditional way", "in today's busy world people just don't have the time", "once they start doing the simple way they will realise how good it is and then get serious", etc etc. But honestly, how many people who are only prepared to do Taijiquan if it is simple ever go on to do the "real" thing - not many (IF ANY)!

As Mdm Chu said, every aspect of the traditional arts is there for a reason - following the rigorous traditional method a firm foundation is first laid down. When I first travelled to China in the 1990s to train with the Chenjiagou teachers I asked many of them what I needed to do to make the best progress. Invariably the teachers said "practice Yilu". That was what they and generations before them had done. With the establishment of a firm foundation the scope for improvement in all aspects of Taijiquan is unlimited. Done in the time-honoured way Taijiquan maximises the potential of the human body, increasing both the health and martial capabilities of those who really dedicate themselves to it.

Look at the sayings passed down for generations:


"Drink the water of Chenjiagou your legs will surely shake"
"You must be prepared to eat bitterness"
"One day's chill doesn't result in three feet of ice"
"One day of practice, one day's skill"
"Three years, small achievement;  five years medium achievement; ten years, great achievement"
"Don't go outside the door for ten years"...

So, no it is not easy! It is complicated, physically challenging and to get real benefits it needs long-term committment! But, for the reasons mentioned, I believe that the traditional way, with all its complexities and demanding requirements, is needed more today than ever.


I'd like to plug the website of the Journal of Asian Martial Arts
This is a great resouce with a section dedicated to traditional Chen Taijiquan. Currently there are 15 articles about Chen Taijiquan: 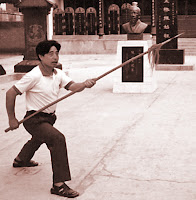 Three Techniques of Dantian Rotation in Chen Taiji: Internal Energy Techniques and Their Relationship with the Body’s Meridians by Bosco Seung-Chul Baek


Tensegrity: Development of Dynamic Balance and Internal Power in Taijiquan by Michael Rosario-Graycar and Rachel Tomlinson

Chenjiagou: The History of the Taiji Village by David Gaffney 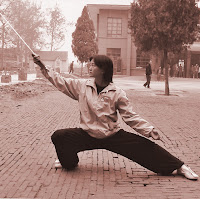 Going Beyond the Norm: An Interview with Chen Taiji Stylist Wang Xian by Asr Cordes

Taiji’s Chen Village: Under the Influence of Chen Xiaoxing by Stephan Berwick

The Nurturing Ways of Chen Taiji: An Interview with Yang Yang by Michael De Marco & A. Edwin Matthews

An Encounter with Chen Xiaowang: The Continuing Development of Chen style Taijiquan by Dietmar Stubenbaum

Everybody was Kung Fu Fighting - Except for the Taiji Guys!!

Sat back to watch BBC4's - Timeshift, Series 12, "Everybody was Kung Fu Fighting: The Rise of Martial Arts in Britain" last night. Its promo looked promising -

"Timeshift, the black belt of the archive world, takes a look at the rise of martial arts in Britain. From the early days of bartitsu, through judo and karate to kung fu, Britain has had a long and illustrious involvement with the martial arts. Gold medals have been won, Sherlock Holmes's life has been saved and aftershave has been worn - all thanks to the martial arts".
Over the course of an hour the programme documented the early days of "Bartitsu" a Victorian Ju Jitsu inspired self defence system for gentlemen introduced by martial arts pioneer E.W. Barton-Wright. Bartitsu was such a hit that Sir Arthur Conan Doyle had his hero Sherlock Holmes use it to save himself in a fight to the death with his arch-enemy Moriarty. Sarah Mayer the first non-Japanese woman to get a judo black belt in famous Butokukai club in Japan- from Jigaro Kano the creator of Judo no less. The deadly skills of Captain W.E. Fairbairn used by the British special forces in the Second World War. Those who think that cross training is a new phenomenon had obviously never heard of Fairbairn -versed in Jiu-Jitsu, Kodokan Judo, French Savate, Cornish Wrestling, Western and Chinese Boxing. Ticky Donovan the coach who developed the British Karate team into a formidable force that won the world championships 5 consecutive times - a feat not even the Japanese could manage. You get the general idea...

Finally in the closing minutes it got to "Taiji". Panning into a group that looked as if they were on their last legs in some anonymous old people's home the narrator dismissively concluded: "But martial arts has also evolved in the opposite direction, towards methods that seem as far away from combat as possible...slow moving zen-like type of exercise...for those least inclined to want to know anything at all about fighting"!


There it is, the martial heritage of Taijiquan dismissed in a sentence! So what happened to the legacy left by the great Taijiquan masters of the past - masters of all styles of Taijiquan:  Chen Fake who single-handedly stood against the "Red Spear" rebels; or Yang Luchan dubbed "Yang the Invincible" for his peerless fighting skills; or Sun Lutang, Wang Peisheng, Chen Zhaopi....

More people than ever are doing "Taiji" but obviously somewhere along the line the martial aspect of Taijiquan is being lost in transmission. It is great that people of all ages can train TaijiQUAN, but where is the QUAN. There is a danger that as more and more people accept the above perception it will become a self-fulfilling prophecy.