We're all part of the "martial forest"... 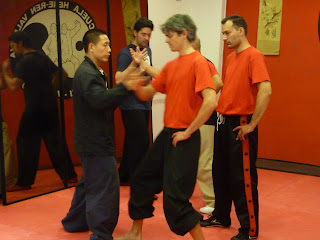 At the moment I'm travelling with Chen Ziqiang on part of his European workshop tour. After taking in France and Spain, we're currently in Poland with Slovenia and our own school in the UK to come in the next few weeks. During the down time between workshops its been interesting to hear his take on training, on attitude and on martial arts in general.

According to Chen Ziqiang, in the past the martial arts community as a whole was referred to as "wulin" or "the martial forest". Distinctions such as "internal" and "external" were not emphasised like they are today. The arts were practical by nature and it was accepted that all martial artists were ultimately looking for the same things: a strong and healthy body; the ability to defend oneself and one's community; and to be able to attack effectively if necessary. Regardless whether a practitioner of Taijiquan started from the training method of slowness and looseness, or a so-called external practitioner from speed and hardness - it was accepted that ultimately they would arrive at the
same place. That is at a point where the body was perfectly co-ordinated; using weapons, the weapon was an extension of the body; movements were completely devoid of stiffness and clumsiness; and the martial artist was powerful, agile and possessed a fully focused spirit.

Chen Ziqiang was quite clear that among high level practitioners there was little conflict as they all knew they were working towards the same goals. Those coming up through the ranks, though, incessantly questioned the methods of other styles and even others within the same style who did not follow exactly the same lineage as themselves.

During one workshop someone asked why the students of one famous Chen style teacher seemed to lean forward more than the practitioners from Chenjiagou. Chen Ziqiang was clearly exasperated and said, in Chinese, "why do they have to ask questions like this? His answer was "Your teacher has told you what to do, do it". Afterwards he said that this kind of thinking and the need to keep looking at and comparing what others are doing revealed a lack of confidence in their own training.

Once you have found a path you wish to follow, commit to it. This is the traditional way...