Chen Xin wrote that if you don't understand spiral movement you don't understand Chen Taijiquan. The reason for doing seemingly endless practice of the different silk reeling exercises and of training the form slowly is to reach a point where the whole body moves as one functional unit. Without this training, a student may only be able to harness forty or fifty percent of their body's potential. By realising the reeling silk method, they may be able to bring into play ninety or ninety-five percent (or even more!) when emitting force etc. This training method of fixing precise movement patterns before speeding up the movement has been passed down through generations of Chen Taijiquan practitioners for getting on for 400 years.

Its fascinating to see some of the leading lights in modern sports performance training "discovering" the importance of fixing correct movement patterns before adding intensity. For example, Mark Bennett MBE, founder of Performance Development Systems (PDS), who provides high quality performance coaching & mentoring to national and international coaches, organisations, teams and athletes. In the British Army, he served as the senior instructor at 29 Commando running the physical development and commando training for the Regiment. In an article on how to train like double Olympic Gold winner Kelly Holmes, Bennett listed 5 crucial areas that must be attended to: nutrition, motivation, exercise, rest and movement. It's this last category that we are interested in here. Under the category of "movement" he wrote, "All Olympians know that to achieve great results, it's vital to spend time perfecting the basic movements before applying any level of intensity. This is called "competency before intensity". With this in mind, never be afraid to take a step back, reduce the level of resistance to perfect the movement...". Likewise, in Athletic Body in Balance: Optimal movement skills and conditioning for performance, leading coach Gray Cook describes a pyramid  made up of three levels - the base (the largest and most important level) representing the establishment of correct movement patterns, the middle level representing strength, power and general conditioning, the top level - built on the preceeding strong base representing functional skill. In Cook's own words: "The optimum performances pyramid is the pyramid in which movement patterns, movement efficiency and sport skill are balnced and adequate". The inhabitants of Chenjiagou have been following this cutting edge sports science for four centuries!
How many times are Taijiquan students seduced by the lure of the more (seemingly) exciting advanced forms, weapons, applications etc before they have even begun to put down an adequate foundation. This is a certain dead end road. Chenjiagou practitioners have the advantage of seeing learners at each stage of the learning process, so they readily accept the validity of the traditional syllabus. Western students hear the tales of the grandmasters spending long periods on the foundation form, but often either get bored or lose confidence. I read one "advanced" student of one of the Chen grandmasters proudly proclaiming his 200 hours of training with said teacher during which time he had apparently gone through the entire syllabus. Chen Taijiquan is a powerful and effective martial art that has stood the test of time. It has its own unique movement and energetic requirements and is not just Shaolin Gongfu or Karate done slowly. The slowness of Taijiquan allows the practitioner to pay attention to the myriad requirements which, when all in place, gives a tremendous degree of rootedness, structural integration and balance. Looking back at the notes I took during Chen Zhenglei's First International Advanced Training Camp in Hebei, China in 1999, I had highlighted the following advice he gave "train the movement, not the manifestation - train the body to be a completely integrated system". Slowness is the method not the aim of practice!
Contrast this with the depressing trend where martial artists of other disciplines open up Taijiquan classes, with no respect or awareness of the complexity of the discipline. Like the following example from the website of a longtime Shaolin teacher (who presumably took the trouble to learn the forms of his system) advertising his Taiji classes: "I also teach Taiji and Qi Gong, derived from my experience in Shaolin (Chinese) Martial Arts. I have studied some Yang and Wu Style forms and choose to devise my own forms for the time being. This is based upon the classical precepts, with a focus upon the cultivation of Chi (energy). Inspired from the heart of the Shaolin Temple and by the rogue monk who was expelled from its walls - by the young boy who secretly watched from a treetop the ‘inner teachings’ of the old man practicing by the moon reflecting on the water, like all monkeys, I experiment with what comes and use whatever sticks...I am more interested in simple movements that can help one relax and unwind, than sharing complicated patterns that lead one away from the belly and into the head. This is another way of saying that I like to teach the bodymind, watch people learn without effort and see them having fun." I wonder if this same guy went to his Shaolin master and described his Shaolin training as "learning without the need for effort" and said that it would be better to drop the traditional animal forms because they were complicated and made him to have to think. Whilst he was at it he could drop the conditioning methods because they hurt a bit! 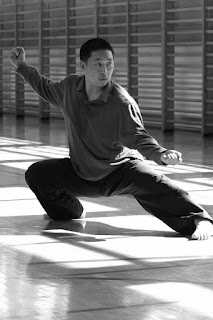 In Chenjiagou there is a saying that to achieve success and skill in Taijiquan you must be prepared to "eat bitterness". There is also a saying that "you must train according to the rules". It is not just about being easy and fun and without effort. The real marker of whether someone is serious about Chen Taijiquan is whether they believe in the method. Don't be in a hurry. Carefully work towards understanding the different requirements, train hard and advance step-by-step!!

Its a sad day in our school today as we have lost  a much loved Taiji sister. Life really is a fleeting journey - at the school Christmas party she was full of joy and laughter, now she is no longer with us. Linda Hargreaves was small of stature but large in spirit. Training with a sabre that was almost as big as herself or doing applications with the big guys - earning the nickname "Linda - little, but lethal"!

What I loved about Linda was her willingness to try everything - to have a go.  Coming to Taiji relatively late, with not such great health and - always - the smallest person in the class - her attitude, beaming smile and ability to encourage others led to her assisting her instructor Lee Davies Conchie in our Blackpool branch. When the dynamic Chen Ziqiang came to the UK last summer to teach the Cannon Fist, she leapt and jumped, kicked and punched, swept and spun through the seminar. Even the normally impassive face of Chen Ziqiang broke into a smile!

How often people come to class and say "I can't". Linda was a glowing example of a person of normal ability achieving success because they  are determined to. She'll be sorely missed. 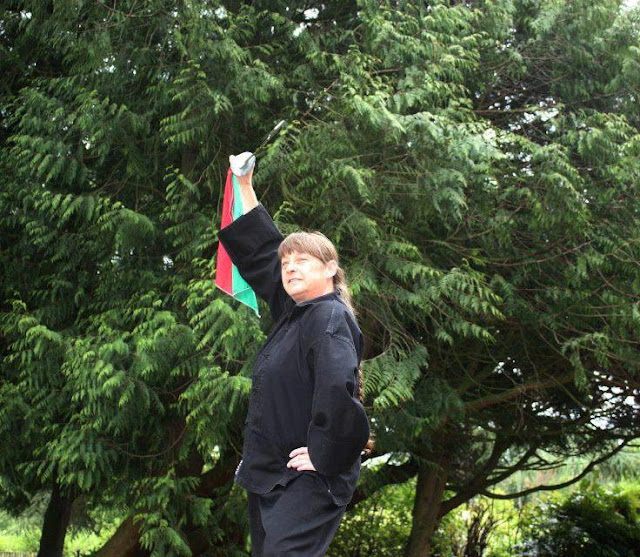 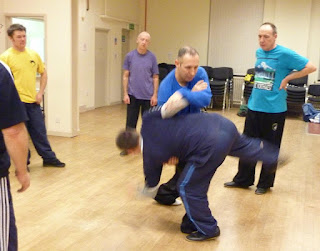 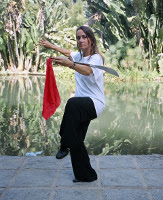