Through realisation not speech...

In November Chenjiagou is quiet. I've been coming to the village for over twenty years now, training in the Chenjiagou Taijiquan School with GM Chen Xiaoxing since 2003. The changes in the village year on year have been quite remarkable. That said, I was unprepared for the difference in the last twelve months: the centre of the village has become a green pedestrianised oasis; on one end of the village a new "mountain" has appeared; even the small dark room two doors down from Chen Xiaoxing's living quarters within the school has had a facelift, with a coat of paint, a mirrored wall and a pair of calligraphys hanging opposite to each other. That aside it remains the place where he teaches day in day out.

One thing that never changes is Chen Xiaoxing's demanding training regimen. Each morning the first session is scheduled for 8am and always begins with zhan zhuang (standing post). As Chen Xiaoxing likes everyone to be standing when he comes in, people usually start five or ten minutes earlier. The floor is paved with stone tiles each about a metre square. As students come into the room they fill up the squares on the floor with one person to each, lining up from the back of the room. By the time he enters everyone is already training. Student by student, Chen Xiaoxing then systematically adjusts the posture of everyone in the room.

Many people describe zhan zhuang as a type of standing meditation. In contrast, I remember Chen Xiaoxing joking some years ago that the thing his students feared the most was the standing. His corrections lead students into a deep and very demanding position - always sitting further back and deeper than their assumed position. Over the course of forty minutes or so the group do their best to maintain the posture. Within a short time some people's legs are shaking uncontrollably, other stronger and more experienced practitioners on the surface seem to hold their shape, but everyone imperceptively moves out of position. After ten or fifteen minutes Chen Xiaoxing returns and repeats the process again leading everyone to a place that tests their limits. The training is painful and mentally challenging and the results come millimetre by millimetre. Chen Xiaoxing brings the standing to a close with a clap of his hands and there is a palpable sense of relief as everyone moves about, some going out into the winter sun to bring some life back their aching  legs.

After five or ten minutes' respite the class continues, now lining up facing the mirrors. For the next three quarters of an hour the training focuses on silk reeling exercises designed to instil Chen Taijiquan's spiralling movement. Chen Xiaoxing doesn't specify which drill students do and most stick to the single front reeling silk exercise or the double hand front to back exercise. Again he moves from person to person carefully moving students through the movement route - always holding the hips down and back so there is no respite  for the legs. Correcting each person through touch, individually addressing their shortcomings: relaxing the chest, back or shoulders; ensuring the body doesn't lean in any direction; fixing any inconsistencies of coordination between upper and lower body; anything that doesn't conform to the standard he requires.

Altogether this first part of the class training zhan zhuang and chansigong lasts about an hour and a half. Throughout the process the students do not talk or ask questions. Their job is to "listen" to and try to feel and understand the posture and movement method and to replicate it as closely as they can. On a blackboard fixed to one of the training room walls some previous student has written the phrase "through realisation not speech". This method of transmission through direct experience is fundamental to a true understanding of Taijiquan. In China there is a saying that to experience once is better than to hear a thousand times. Like the difference between someone describing a dish and actually tasting it for yourself. No matter how articulate the person, words can give some idea, but they can never transmit the experience of actually eating the dish. The same holds true for Taijiquan's method and expression. A short film last year featured Yi Long the Shaolin "Fighting Monk" during which he visited Chenjiagou. Delong is one of China's most famous and colourful fighters who last year lost a close decision in a bout with Thailand's famous Muay Thai boxing champion Buakaw. When his posture was adjusted by Chen Xiaoxing you could see him gasping in an effort to maintain the position.

During the next hour and a half of the class the group separate to train whichever aspect each person wants to, either in the training room or in the yard outside - some training the different handforms, a few training push hands drills. This part of the class is more informal as Chen Xiaoxing wanders around often joking, sometimes offering pointers to the faults he inevitably finds. Now people can ask if there is anything they are not clear on - bearing in mind his lack of patience for stupid questions. One less experienced and over-eager student would often spend this time doing the forward and backward stepping push hands drill. Frantically bobbing up and down as he trained, ignoring the advanced students who laughed at his efforts and advised him there were no shortcuts and that gongfu couldn't be laid down in this way, prompting Chen Xiaoxing to say "don't tell people that I have taught you to do that"!  Another often quoted expression is that "If you train quan without training gong,  a lifetime of training will bear no fruit". They, for the most part, trained individual movements from the forms or carried on training the fundamental exercises. Slowly and systematically embedding the required shape, energetic state and movement method until it becomes the default state of the body. Without following this path an individual can fool themselves gaining false confidence by collecting a large number of applications. However, at the time their skills are needed, ultimately they will not work optimally when tested under  pressure. The session finishes at 11am when everyone breaks to eat and rest. At 3pm the process is repeated...

Western students  often find this approach problematic, as they are educated through a school system that values and rewards students who constantly raise their hands and ask questions. The paradox is that while seeming to ask fewer questions, most of the students in Chen Xiaoxing's class have a far greater awareness of Taijiquan's underlying theory and principles. While it may be difficult to put into practice, this theory has never been more readily available to students than it is today. One of the most frustrating part of teaching is the constant need to reteach people the choreography of forms that they simply don't train enough to become genuinely familiar. The preliminary stage of Taijiquan training requires students to drill the forms repetitively until the form is completely familiar. The next stage then  is to dismantle the form, training each movement to conform to the requirements. This can only be done in a slow, meticulous and mindful way. 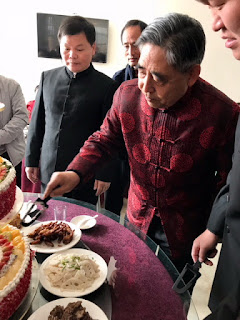 Afternoon training was suspended on the 23rd to celebrateChen Xiaoxing's 65th birthday. One of the things I love about him is his aversion to pomp and show. I remember celebrating his 60th birthday not in some fancy hotel, but in the main training hall of the school. This wasn't possible this time, as the hall now houses a full size boxing ring and a permanent raised tuishou platform. Instead we decamped to Chen Ziqiang's training centre. Like before students of the school waited on the tables and the food was cooked on the premises by instructor Wang Yan's father who is a chef and restaurant owner.  The participants were an intimate group of disciples and close friends with not an official to be seen. Some of these guys have trained with Chen Xiaoxing since the 1980s and have their own schools being renowned teachers in their own right. But when they come back to Chenjiagou they still line up in the small dark room to train the fundamentals...