Why slow training wins the race...

What makes Taijiquan training different from  that of other arts? I've been asked this question many times and usually answer that the most obvious difference is its use of slowness and looseness as the core method to bring out necessary martial qualities like speed, strength, accuracy etc...


To reach an advanced level we need to practice slowly, taking care to self-correct all the time. Using slowness to achieve detail. What details are we talking about? Here's a few to be going on with:


2.    Intention and how it matches to movements


3.    Maintenance of the correct energetic state (of different parts simultaneously to enhance the "whole")

People often either over-complicate or completely misunderstand Taijiquan's training process. In a hurried effort to access higher levels of skill, making the critical error of ignoring necessary stages such as laying down the correct physical shape. Completing this stage naturally opens the door to the internal aspects. Simply put, if the learners hips are not level or the shoulders are lifted, if the chest sticks out or the body is leaning - there's no need to be too concerned with dantian qi.  If training is approached logically it is obvious that at this stage they'd get more bang for their training buck by correcting the visible mistakes rather than losing themselves in some fanciful esoteric wandering.


Chen Yu, in "Chen Taijiquan: Masters & Methods" cautions that haste makes it more likely for movements to be cut short and in the process important details missed out. He advises practitioners to never do an approximation of a movement: "In every movement, the spirit must be guiding the energy, and the intention driving the power" - training in this way enables the practitioners to develop vital martial qualities including stability, accuracy, speed and ferocity. To ensure not to make the mistake of cutting short and approximating he suggests that  "every movement should take 3-5 seconds to complete so that the Jin in every action is brought out".


A central goal of Taijiquan is for movements to become natural, to rid every action of any awkwardness and not telegraphing within an action. Chen Xiaowang often repeats the phrase "natural is the first principle". In this context natural means that every part and each section of the body do what they are meant to do without obstruction. Practitioners are often able to (correctly) repeat the requirement that one must be loose and relaxed in order to enter the door of Taijiquan. However, relaxing is not a simple process. For a start,  if the body's position is not correct, it cannot relax properly.  The process of adjusting and "fixing" the posture, undoing fixed habits and embedding new ones that conform to the system's detailed requirements can only be done in meticulously and mindfully.


Bringing out the skills of Taijiquan require the ability to move with precision and focus towards an intended direction. In practical term every movement must be finished carefully and exactly, as the end of one movement represents the starting point of the next. During a particular workshop Wang Xian stressed that only by starting from the correct position can the next movement be done correctly. He said with humour (I'm paraphrasing here): "if you start from the wrong position it's 100 percent certain your movement will be incorrect... If you start from the correct position, there's a small chance you might do it correctly".

On the flight home after a couple of weeks of seminars and  a short book tour on the west coast of America I had the chance to reflect  on the trip as a whole. The first evening of our stop at Bill and Allison Helm's Taoist Sanctuary of San Diego opened with a lecture on our latest book Chen Taijiquan: Masters and Methods (published in August). The talk was structured around four themes that recurred throughout the book: ideas about the nature of Taijiquan; the importance of nurturing within the training process; the most effective way to train if you are to bring out the functional capacity of the art - in particular the role of body integration; and finally some of the problems   facing the art of Taijiquan as it goes into the future. Problems include: the fact that for the majority of practitioners Taijiquan is a discipline no longer practised for its original purpose; the fact that while the number of people practising Taijiquan is at an all time high, the number reaching any meaningful level of skill is depressingly small; and the many misconceptions about the art that still persist...


Over the course of the seminar the San Diego group trained Chen Taijiquan's jibengong (basic training methods) and the Laojia Yilu. Any complete training approach needs to consider multiple characteristics including both internal and external aspects of training. All martial arts, in their own way, follow processes designed to systematically develop the attributes of power, strength, speed and the ability to change. The basic training exercises and first routine provide the template through which Taijiquan practitioners can hone these qualities. At the same time Taijiquan’s training emphasis is very different to other martial arts in the way in which practitioners are required to put aside generally accepted methods of improving the previously mentioned elements of power, strength, speed and changeability:


In terms of strength - they are asked to put aside physical strength as a means of developing looseness (song) and pliancy (rou) – “Using intention and not strength”; To increase speed, the system counter-intuitively instructs practitioners to slow down their movements, keeping faith with Taijiquan’s maxim which states that “extreme slowness gives rise to extreme speed”; To develop the quality of changeability Taijiquan advises learners to “use inaction to control action, meeting all changes with constancy”. With this basis the skilled exponent is psychologically strong enough to wait for opponents to over extend their position before launching an attack.


After the San Diego seminars we spent a couple of days of down time in San Francisco’s historic Chinatown. The oldest Chinatown in the U.S., this colourful district played a pivotal role in the history of Chinese martial arts in the country. Walking down the bustling streets of the largest Chinese enclave outside of Asia has much the same feel as strolling through the back streets of Hong Kong. Loud murals decorate many of the side streets - terracotta warriors, the monkey king and his companions and of course Bruce Lee, the “Little Dragon” born in the city in 1940 before moving to Hong Kong with his parents as an infant. The story goes that on his return to America, the brash young Lee alienated many of the older established Chinese masters as he attacked the “classical mess” of traditional gongfu and his assertion about its reliance on, among other things, “ineffective” forms training. 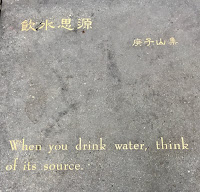 Somewhat ironically, a paving slab beneath one of the murals of Bruce Lee was inlaid with a bronze inscription of an old Chinese idiom - “When you drink water, think of its source”. In one form or another I've heard this saying repeated many times over the years. From my younger days doing Shaolin Gongfu when we were told never to forget we were no more than links in a chain. In Chenjiagou I saw the saying presented in a slightly different form - "When you drink the water, remember the person who dug the well". Chen Taijiquan is close to four centuries old. It didn't emerge from a vacuum but was built upon existing knowledge in areas including martial arts, traditional health practices, elements of Chinese medical theories and ancient philosophy. Throughout Chen Taijiquan: Masters and Methods all the older generation teachers interviewed stressed the importance of following a prescribed route that had been passed down by previous generations. Wang Xian, speaking of this "carefully preserved knowledge... [stated that] Taijiquan offers one of the most formally thought out, meticulous, and clearly articulated set of principles and practices". Our job in training Chen Taijiquan is to try to understand and manifest these principles that have been handed down.


Stopping for a coffee at the Caffe Trieste I was told by a chatty regular that this was the place where Francis Ford Coppola wrote the screenplay for ‘The Godfather.’ I did a little research on the place and found that "...when Papa Gianni founded the Trieste in 1956, upper Grant and the Trieste was ground zero of the Beat Generation. The poets, the writers, the thinkers, the talkers all came here.” Since we were on a mini book tour I took that to be a good omen!!


Our next stop was Kim Ivy's Embrace the Moon School in Seattle. The Seattle programme began with a "Book Club Potluck" - Great food followed by a lively Q&A session on Chen Taijiquan: Masters and Methods - covering the books content and the background story behind its creation. We basically wrote the book to “scratch an itch” and tried to present it as if we were sitting around the fireside having an informal chat with the most illustrious elders of Chen Taijiquan.

Like the seminars in San Diego, training centred around Chen Taijiquan's basic exercises and Laojia Yilu. Taijiquan looks to hone four external and four internal aspects: externally training the hands, eyes, body method and footwork (shou, yan, shenfa, bu); internally training spirit, intention, intrinsic energy and trained power (shen, yi, qi, jin). Taken together these represent the "gong" of the art. In practice these elements must be cultivated carefully bearing in mind the health, strength, experience and level of understanding of the practitioner. Over the course of the US seminars practitioners varied in age from people in their twenties to seventies - from pro-athletes to retired office workers – from veteran practitioners to newcomers whose experience could be measured in months. To be successful training has to take into account these natural differences and be approached on an individual basis. As the saying goes “Don’t’ compare yourself to another person today, compare yourself to yourself yesterday”.


So what are we trying to achieve when we train Taijiquan? The most obvious place to start is with the name of the system - "Taiji" refers to a philosophical concept that dates back to China's ancient past. "Quan" is martial arts. Together giving a total art built upon the integration of philosophy and martial arts. Manifesting the art to its full potential depends upon working from where you are today and embracing concepts that have grown from a different culture and mindset.