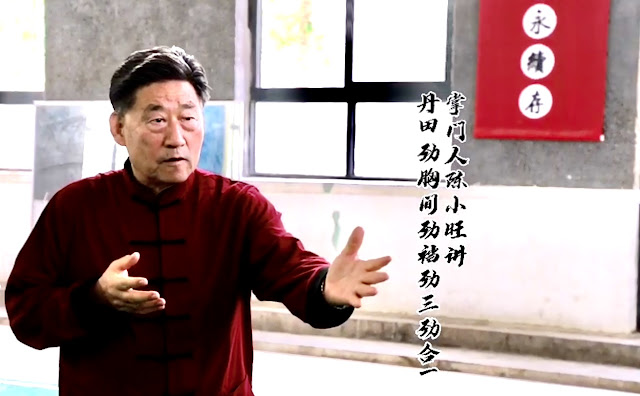 Understanding how to generate and release power in Chen Taijiquan isn’t a simple task. To begin with we must be clear how it differs from conventional ideas of power and strength. We could go to any fitness or weightlifting gym and find strong and fit individuals. Does that mean they can easily replicate Taijiquan’s fajin? In a recent video Chen Xiaowang is seen giving some pointers to a group of young instructors from the Chenjiagou Taijiquan School. By normal standards they would be considered to be flexible, loose, powerful etc. He gave them a short master class pointing out some of their mistakes and how they could correct them and improve.


To begin with Chen Xiaowang emphasised the need for practitioners to broaden their minds to accept the idea of training the body to work as an integrated system. He explained “proper fajin involves three routes of jin”. That is three different elements of trained power and the course and direction of their expression. Each of these aspects has to be developed and be closely coordinated with the others. The three routes of jin identified were:


Dang jin is the contained and elastic strength of the crotch. In Chen Xiaowang’s words, it is “the power created by the convergence of the power of the two legs.” Second is the connecting power of the body’s centre which links the lower and upper body. Answering the question what is dantian jin, he explained “It is the power of the waist, supported by the legs that should not affect the dantian as the core.” That is, the action of the legs shouldn’t disrupt “the complementary and uniting relationships of the dantian and the whole body.” The relationship between the legs and the dantian then is “like the relationship of water and boat.” Finally, the power generated from the dantian is transmitted to the chest. “The strength created by the chest is known as chest jin.” A well known and often quoted Taijiquan saying is that power comes from the feet, through the legs before being directed by the waist and expressed in the hands. This speaks of a smooth system which, after initiating power, transfers and adds to it en route to its end point. 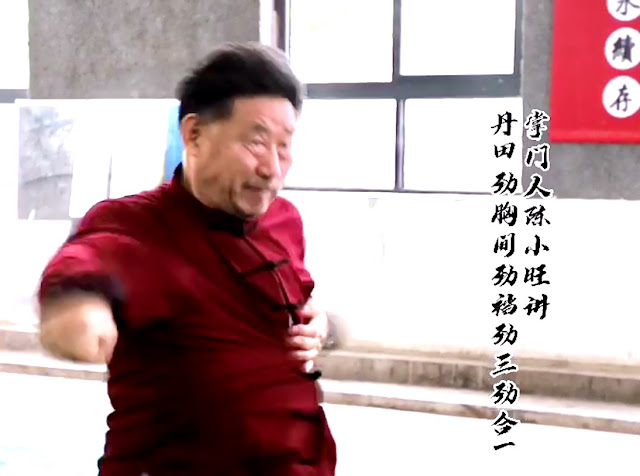 According to Chen Xiaowang, the most common mistakes made by practitioners as they fajin include:


·        An over–reliance upon the use of excessive muscular tension or stiffness which acts as a brake and impedes the smooth release of whole body connected power. Tensing up the upper body has the effect of locking the potential power of any movement within the body. It also has the secondary effect of preventing the dang and waist from moving in a fluid and unrestricted way. This is a serious problem that must be rectified. A practitioner may look powerful to an untrained observer. But if the fist is clenched tightly and the muscles are overly activated during the gathering phase of a punch, then “the jin is stuck inside.”  Chen Xiaowang advised that when preparing to punch to not “tighten the upper body, release any tension and hold the fist lightly.”


·       Failing to understand how to position the legs correctly to simultaneously generate power and support the dantian. He puts it simply – “If the position of the legs is not correct the dantian will have no power.” Conversely, when they are placed correctly the dantian is then able to generate power. To illustrate the point Chen Xiaowang compared the lower plane to the carriage of a cannon that needs to be stable if the weapon is to be fired accurately.


·       Turning the hips too much. It is important not to lose the correct position of the hips. He showed the common mistake where a person punching, for example with the right fist over-emphasises the hip twist – “…the right hip twists too much to the left as the fist goes out. The two kua should remain level and forward facing.”


·        Very often people only use the chest jin, and are unable to execute dang jin. “Over-extending the upper body is a clear symptom that an individual is using too much upper body strength and not enough dantian and dang jin.” In Taijiquan terms the over-reliance of one jin at the expense of the others is referred to as the dispersion or separation of jin. “Releasing power, the fist and the elbow move together but each has its own distinct action. At the moment of emitting they become one line, with the upper and lower parts together and not isolated.”


·        When, according to Chen Xiaowang, “the body is not supported by the bone structure.” That is, if the body slants or bends forward out of principle.  “There should be no leaning at all and the buttocks should not protrude as that compromises the waist i.e. dantian jin.” In practice this can happen when someone takes too low a posture. Unable to maintain the correct postural framework after going past the limit of their strength they are forced to compensate by coming out of the correct posture. Here he said, the answer is to “ take a higher posture because the stance has reached the limit of your normal strength.”


As any shortcomings in dang jin, dantian jin or chest jin limits the overall potential of any fajin action, the question that must be answered is how to most efficiently coordinate the three jin routes?  Chen Xiaowang said - “If all three jin routes are used together in a fully coordinated way, then each should not affect the other in a negative way. Dang jin, dantian jin and the chest/shoulder jin explode in unison.”


Where an untrained or unskilled person puts all their attention on their fist from the beginning to the end of a punch, the action of a skilled exponent is qualitatively different. The spark of intention to release the body’s power is like lighting the touchpaper of a stick of dynamite. Once the process has been activated the practitioner’s role is to control and direct the power of the whole body out to a single focused point. Chen Xiaowang explained that when using jin, “You do not take an active role, but a reactive role, in effect following the body’s jin.” In this way the power can be directed exactly where it is needed in an instant. A well known Taijiquan expression – “Distance fist, near elbow, close up shoulder” – advises on the appropriate technique to be used depending on how close you are to an opponent. Chen Xiaowang explained,  “You use your  fist when (an opponent  is) far. When an opponent is near you won’t use your fist, you’ll use your elbow. [Extremely] close to your  body use the shoulder.  The same jin routes only the distance is different.” 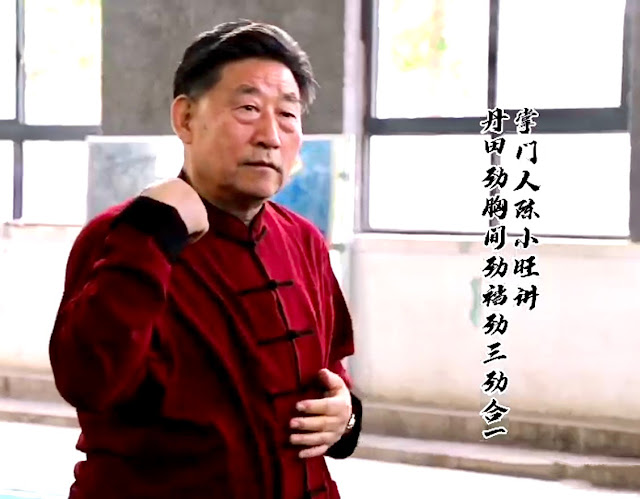