“Triple tasking” and the correct development of intelligence ...

I was chatting with one of my students who has Parkinson’s disease. He told me about one of the methods he was following having taken advice on the best way to slow down the progress of his condition. The most obvious physical symptoms of Parkinson's are tremor, stiffness and slowness of movement. Non-motor functions are also affected with impairments in the domain of executive functioning being common. A day-to-day example of executive functioning would be something like multi-tasking situations like walking with someone while having a chat. He had been asked to “triple task” – for example riding on a stationary bike while, at the same time, turning a hand crank and counting backwards from one hundred.  The advice he was given has a clear parallel with Taijiquan training.


I remember an article by the late master Feng Zhiqiang in which he spoke of the benefits of Taijiquan training. As well as the usual benefits like: the development of both internal and external strength, enhanced body coordination, looseness and flexibility, mental quietness, martial ability etc, he spoke of Taijiquan as a means to train “the correct development of intelligence.” What does this mean in practical terms?


Taijiquan training works towards unifying all elements of “separateness.” So there can be: no raising up without some aspect of sinking; no focus on forward movement without simultaneously considering the rear; no focusing on the external shape without paying attention to the internal energetic sensation. For the beginning student it is enough to try to keep the body upright, be as loose as possible, and try to keep the feeling of lightly lifting the top of the head. Over time the mind is engaged to a greater and more subtle degree. In Chen Taijiquan this is sometimes referred to as the “rule of three” where the body is divided and subdivided around its upper, middle and lower aspects. For this reason Taijiquan has been called the study of contradictions. It is the reconciliation of these contradictions that eventually creates the experience of “oneness” or true holistic movement. So when we talk about balance we aren’t talking about some static state, but a dynamic process as an individual continually and instinctively adjusts to shifting and evolving circumstances.


Achieving this requires us to carefully following a process for an extended time with no expectation of quick successes. Trying to put this message across in today’s ever more frenetic and instant culture can sometimes feel akin to King Canute trying to hold back the tide. You only have to look at popular apps like Headspace that promises to show “how to meditate in ten minutes.” During one of our training camps in Chenjiagou Chen Xiaoxing remarked that anyone can train hard for a week or two, but few people can do it daily for five years and beyond.
I was struck by the following passage from an article by Phillip Zarrilli describing the process of learning the ancient Indian martial art kalarippayattu:  “A student’s regularity of attendance, attitude, seriousness of purpose, maturity and emotional stability all come into play in the teacher’s decision regarding advancement. None of this is expressed or spoken. The teacher collects and registers his daily impressions of students. There is no overt sign of approval, nor is reassurance or encouragement given on any regular basis. The individual is basically alone, confronting himself as he struggles awkwardly with the external form of the system and to advancement within it.”
at June 25, 2019

Power focused to a single point In practical terms releasing power can only be effective if the person applying a technique can combine the ... 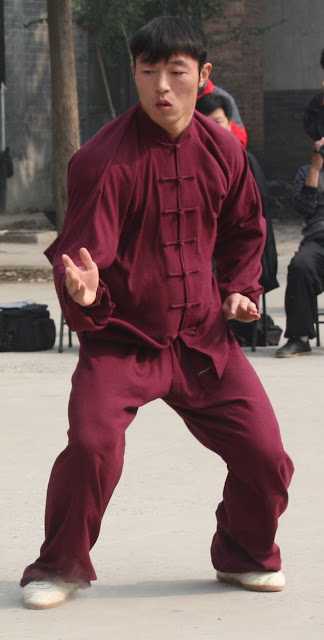