We arrived back from China yesterday after our school's latest intensive training camp with Chen Xiaoxing in the Chenjiagou Taijiquan School. This year's group was 11 strong, made up for the most part of instructors and long term practitioners. As the rapid pace of China's economic development continues unabated, there have been many changes in the village since my first visit in 1997. This was the tenth anniversary of our school's annual visit to train in the village school with Chen Xiaoxing, and one of the things that has not changed is his insistence upon traditional village style training. In the village people often use the expression of "training the frame" rather than "training the form". The difference is subtle. The idea of training one's frame points towards great attention to minute details of posture and movement, rather than simply popping out repetitions. This is the way of Chen Xiaoxing. 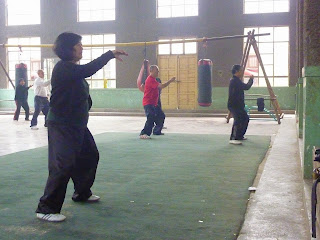 Every day the group trained for 5 hours, broken into a morning and an afternoon session. Each session is the same - half an hour of standing, half an hour repeating one reeling silk exercise and the rest of the session doing a few movements of the form and then repeating them until the session was over. Throughout, Chen Xiaoxing meticulously corrected everyone in the group relative to their level.  Once a mistake has been identified, for example a tendency to lean in some particular direction, to stick out your chin, raise your chest etc - then that is what must be painstakingly undone through every movement in the form. Some people find this type of training incredibly frustrating; understanding the correction intellectually, but confusing this with what is required, which is to reflect this understanding physically.


One of the sayings often quoted in Chenjiagou is the idea that "you should do the right thing and - not be in a hurry for success". This does not apply only to Taijiquan, but to all traditional martial arts and is very much at odds with modern ideas of "fast track" methods and short cuts. The essence of traditional Chen style Taijiquan is today, as it has always been, rooted in the deep cultivation of all the physical, mental and energetic capacities of an individual. This means following a precise training methodology. Clearly understanding the rules and requirements of the system and then training each mistake that has been identified until it is eradicated.

The last day in Chenjiagou was marked by the highlight of the trip -  a ceremony in front of the main training
hall to mark the formation of several official international branches of the Chenjiagou Taijiquan School. Chen Hui, senior instructor of the school, in the absence of Chen Ziqiang who was abroad teaching, was the master of ceremonies. In the characteristic style of all official Chinese events he loudly announced what the event was, before introducing a series of demonstrations from instructors and students of the school. First up were four students ranging in age from early childhood to about late sixties showing Taijiquan as a discipline for all ages. This was followed by demonstrations of the hand and weapons forms of the system and then a demo of traditional push hands by two of the school's instructors. 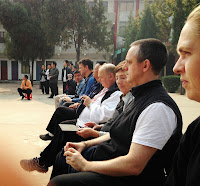 
"On the 22nd October 2013, 19th Generation inheritor Grandmaster Chen Xiaoxing represented the Chenjiagou Taijiquan School in holding a ceremony and the presentation of plaques to England's David Gaffney and Davidine Sim, Seattle's Kim Ivy and San Diego's Allison Helm. This follows the establishment Italy's branch. The school has now established branches in England and America. With the establishment of the branches we aim for more standardisation of Chen Taijiquan and stricter management in order to promote and propagate the pure essence of traditional Chen style Taijiquan". 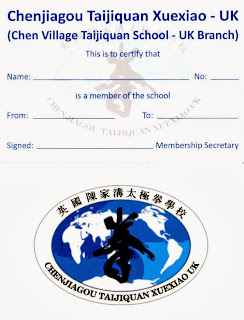 With the naming of our school as the official UK branch of the Chenjiagou Taijiquan School, Taijiquan students and practitioners in the UK can now apply to join as Individual Members. Benefits of joining include: