At his recent training camp in Chenjiagou, Chen Zhenglei addressed the question of how a practitioner should approach Taijiquan if they are to develop high level fighting skills. During the course of his lecture spoking about what people should focus on at the different stages of training? In summary he suggested that the development of Chen Taijiquan’s internal martial arts skills arise from following four steps:

1. The first step involves an in-depth and meticulous study of the “gongfu frame” (the first routine) of Chen Family Taijiquan. Chen Taijiquan’s gongfu formula is based on  the foundation of the original boxing form that has been passed down from generation to generation.

2. From this basis studying the indoor methods within the gongfu form that enable the altering and transformation of power and the system’s attacking skill.  These skills are based on the changes and transformations that arise from the total familiarity of the gongfu form.  Study each and every move for the ability to bring out the perfect round, complementary and spiral force, and the skill to transform each and every move that can be utilised. The goal here is to achieve the highest level of power that encompasses looseness, pliancy, elasticity and “shaking power”.

3. The third step is to study the indoor method of tuishou.  Based on the foundation of the alternating and complementary spiralling skill, learning the two persons tuishou methods, using the skill that has been extracted from the meticulous study of the form. Through these methods becoming familiar with the different energies/power and attack/defence possibilities.  Practicing until one is completely accurate in listening and differentiating incoming energies and until reaching the stage where the opponent can be felled unwittingly and unconsciously.

4.  Finally, studying the sanshou method of Chen Taijiquan.  Now building on the foundation of the previous steps, a practitioner undertakes two persons’ sparring that is not restricted by the prescribed form, so as to learn the full repertoire of defence and attack. Using the ba fa - peng, lu, ji, an, cai, lie, zhou, kao - together with seizing, grasping, throwing, sweeping, practicing possibilities of actual fighting.  Until reaching the stage of being able to borrow another’s force, to “divert thousand pounds with four ounces”.

As always, the advice was that there could be no shortcuts and that the above four stages must be progressed through step-by-step, layer by layer, gradually and incrementally increasing one's level of skill. 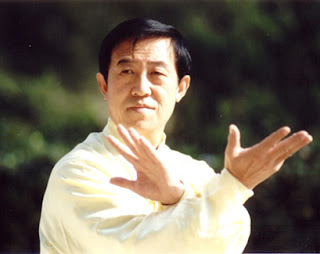