Bourne director travels to China to find out more about Bruce Lee and the Taiji Connection! 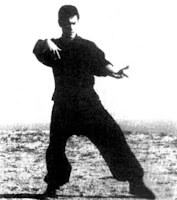 I came across an interesting article on China’s “World Taijiquan” website a couple of months ago that discussed a set of photos taken at Long Beach, California in 1964 showing Bruce Lee training Taijiquan.  Famous for films such as Enter the Dragon, Fists of Fury and The Big Boss, the article asked why it was that while everyone knew about the influence of Wing Chun master Ip Man on Lee’s martial arts, the importance of Taijiquan on his development had been so overlooked. 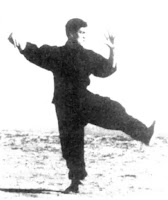 Lee’s earliest introduction to Chinese martial arts was through Taijiquan, his first teacher being his father Li Haiquan. Lee senior was a famous Cantonese opera artist who had studied Taijiquan for many decades and by all accounts had a decent level of skill. The general narrative goes that Lee junior stopped doing Taijiquan when he was twelve or thirteen years old and moved on to other things. The article on the other hand stated that “Li Xiaolong (Bruce Lee) studied from his father from a young age, and without break for the next twenty years”…and that “Taijiquan’s gongfu and philosophy played a huge part in his martial arts development”. At the time these photos were taken Lee would have been somewhere in his twenties. Some forty years after his death, it seems that the role of Taijiquan in Lee’s formative years is about to get the full Hollywood treatment.

Nolfi is director of blockbuster movies including The Bourne Ultimatum, The Adjustment Bureau, Ocean’s Twelve and The Sentinel. His latest film project titled Birth of the Dragon tells the story of Bruce Lee’s rise to international superstardom.  While researching the movie Nolfi, was intrigued at how Taiji principles seemed to underpin much of the philosophy within Lee’s own Jeet Kune Do system. In the eyes of the American movie maker Taijiquan was a soft dance-like exercise of little practical use as a fighting art, yet Lee repeatedly exhorted and promoted the principles of Taiji through concepts such as “using stillness to overcome movement”, “the coexistence of hard and soft” and “the cultivation of internal as well as external”…  Nolfi puzzled over this link to Taiji which, to his way of thinking, seemed completely at odds with the dynamic portrayal of Lee on the silver screen.

To satisfy his curiosity he decided to do some firsthand research into Taijiquan in China. Entertainment News reported: “On 29th Oct in preparation for the upcoming American-China collaboration, Birth of the Dragon, Hollywood director George Nolfi flew into Shanghai and accompanied by the CEO of the Qilin Film Industry travelled to Hangzhou to visit 19th generation Chen style Taijiquan inheritor Wang Xian in order to fully understand the essence of Taijiquan culture in preparation for the film”.

The report went on to say that Nolfi came to China with lots of questions about Taijiquan. He was introduced to Wang Xian by billionaire entrepreneur Jack Ma of Alibaba.com and kung fu stars Jet Li and Wu Jing all of whom are disciples of Grandmaster Wang. Without further ado Nolfi was shown the effectiveness of traditional Chen Taijiquan. First up Wang Xian’s disciple Wang JIngchen demonstrated Taijiquan’s short power or cun jin by smashing a pile of tiles. Cun jin can be translated literally as “inch power” - it might surprise filmgoers familiar with Lee’s “one inch punch” to know that this has been trained in Chen Taijiquan for centuries now. Nolfi expressed surprise that Taijiquan could generate force like this. Next up he asked if he could try a little with Wang Xian. Making contact with the seventy year old Wang, Nolfi was instantly tossed to the floor. Afterwards he was reported to have said that it is the first time he has experienced what Taijiquan gongfu is and he wants to put it on the screen. It’s even been whispered that Wang Xian might play a cameo in the film!

Carrying on his desire to understand Taijiquan’s roots and place in the pantheon of Chinese martial arts, Nolfi visited Chenjiagou, where he was given a tour of the Chen Family Temple and the Chenjiagou Taijiquan Museum and watched demonstrations of Chen Taijiquan forms. And the final word to Nolfi – “Through the ages Bruce Lee is the most famous representative of the Chinese people. In the West he is not just the first person to popularise Chinese Kung Fu, but so many years after his death interest in him has not diminished. This time coming to China I want to more closely understand Chinese culture, Chinese martial arts and also the background of Bruce Lee’s life”.

I can’t wait for this movie!