Looking Inside the Head of a Taijiquan Master…

A student brought yet another newspaper cutting to class to show me the “scientific” proof that Taiji was good for you. Without even looking at it I could more or less predict what the piece would say: “Group of elderly people (or children) who had never done Taiji before given one or two classes a week for eight or ten weeks and afterwards showed significant improvement in their ability to … take your pick - not fall down, concentrate… For example, a study at the University of Miami, Touch Research Institute showed that: “adolescents with ADHD showed improved behaviour, less daydreaming and hyperactivity after JUST 10 SESSIONS OF TAI CHI” [my emphasis!] Anyone who knows anything about Taijiquan knows that it is not a simple discipline. Even the keenest young beginner can understand little more than some basic choreography after such a short time. In my opinion these kind of studies do little to improve the understanding or awareness of the true potential of Taijiquan trained in the traditional way – that is, diligently over an extended time. If anything, they feed into the idea of Taijiquan as some kind of flaky exercise for people who don’t have the inclination or ability to work hard.

If we want people to take Taijiquan seriously, of far greater interest and relevance is the scientific study of accomplished practitioners of the art.  I was in Warsaw a few weeks ago with Chen Ziqiang when he was asked to be the subject of an ongoing scientific study into the ability that certain people have to produce or control the level of “alpha waves” in the brain.

Alpha waves can simplistically be seen as the "relaxing waves". However, they also have a vital role to play in the human mind, acting as a bridge between the subconscious part of the mind (theta waves) and the conscious part of the mind (beta waves). I’m no scientist, so I googled the role of alpha waves and came up with the following: “Information, feelings, creativity, memories, which are deep down in one's mind, cannot become conscious if there is no bridge (no alpha waves), between the two states of mind. There are a number of benefits of alpha waves, the most obvious are that you become calmer and more relaxed. It has also many effects on the body. For example, it slows down the heart rate, which can be effective against heart problems, the body finds more time to regenerate and it even has a very positive effect on learning speed and memorization”. When someone is lacking in alpha brainwave activity, rapid thinking and overthinking generally take place.  In addition they are prone to adrenaline rushes and an inability to concentrate.

Scientists Gregorz Wlodarczyk and Dariusz Tuchowski of Biomed Neurotechnology who had travelled from Wroclaw in the west of Poland have been working on a “brain mapping” programme and were keen to literally look inside Chen Ziqiang’s head. "Brain mapping" is not a new phenomenon. Wlodarczyk and Tuchowski have access to a large database of readings of the brains of, as they put it, "common people". Their study aims to compare these with the brains of “exceptional people” who have developed their minds through meditation and similar techniques. The mapping of exceptional people is in the early stages. Up to now in the field of Taijiquan and Qigong they have also done the study with Mantak Chia and expect to test different individuals with religious and meditative backgrounds. 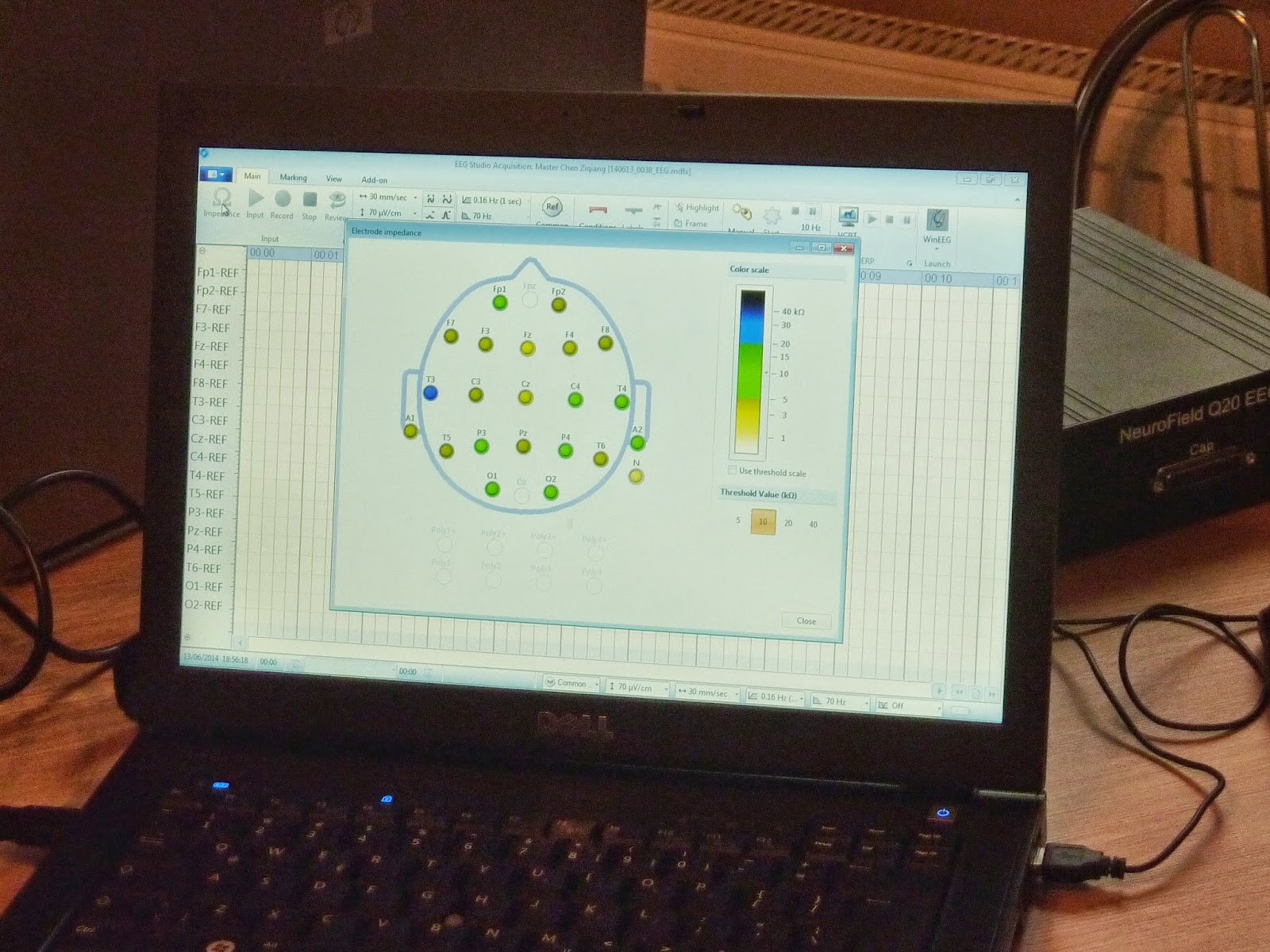 After fitting Chen Ziqiang with an electrode fitted cap that made him look like a Russian cosmonaut about to go into space, it was time to start the experiment. One of the scientists asked Chen Ziqiang if he was going to meditate or to prepare for a fight, did he have any special method for calming his mind and if so whether he could do this now? He replied "I'll try". For the first part of the experiment he was asked to keep his eyes open, as the study was looking to see how he could control his mind in the midst of normal background noise and distractions. Within several seconds the two scientists became excited, pointing at the traces of waves on the computer screen Chen Ziqiang was hooked up to. The experiment was done using first a Russian programme to map the brain activity and then repeated using an American programme. I can’t claim to fully understand the full implications of thestudy, but Gregorz and Dariusz did their best to explain in layman’s  why they got so excited. According to them, “Chen Ziqiang, on both tests seemed to access a


high alpha state very quickly and therefore, to be able to connect his subconscious and conscious brain very quickly… Usually people can only access the back of the brain but he seemed to be able to affect the whole brain, and it was consistent”. If this is not a great scientific explanation I can only say that it’s the best I can do given my non-existent Polish language skills! Eventually they hope to publish their full findings in scientific journals in Germany and the USA.


Chen Ziqiang’s response to all the excitement was a typically understated: “If you can’t control your mind, how can you control your body”.
at July 04, 2014