Taiji – Lost in a digital world 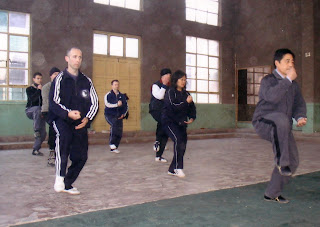 Everywhere we are continually bombarded with messages -  twitter, facebook, texts… all of which of course have to be attended to immediately.  In a recent post internet guru Seth Godin highlighted Allison Miller, aged 14 who sends or receives an astonishing 27,000 text messages a month. Broken down that’s about about sixty an hour, every hour she's awake.  In Godin’s own words: “Some say that the problem of our age is that continuous partial attention, this never ending non-stop distraction, addles the brain and prevents us from being productive. Not quite. The danger is not distraction; the danger is the ability to hide”.
What has this got to do with Taiji? People today often comfort themselves that the busy pace of life today makes it impossible to train like the teachers trained when they were young in China.  Of course they would like to train more but life is just so busy…  Someone put this to Chen Xiaoxing when we were training in Chenjiagou and he was clearly irritated at the suggestion that things were easier in his time, dismissing the idea out of hand.  He spoke of the back-breaking work they had to do when all farm work had to be done by hand and laughed that even when machinery became available, they were to poor to afford it.  Then came the Cultural Revolution where he toiled in a brick factory. But they still found time to train.  As he put it, most people today work about 8 hours a day.  Beyond that the individual has the choice to do what they want with the time.  Chen Zhaopi, teacher of the “Four Buddha’s Warriors” of Chenjiagou put it very simply saying that: “Besides having the direction of a good teacher, the main criterion is whether the person himself is willing to put in the hard work”.
Developing skill in the traditional way takes time, patience and perseverance. So turn off your laptop, switch off your mobile phone, log out from your facebook account, stop stalling and get on with the real work!
at January 12, 2011